How to Design a Pump Station for a Flood Zone 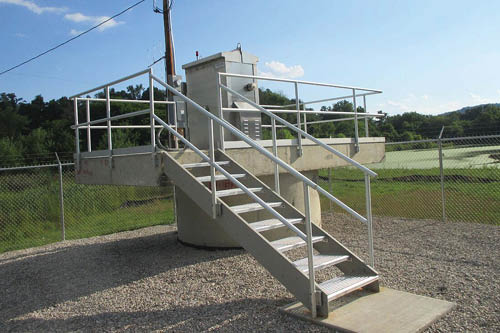 What is the Importance of a Flood Zone Pump Station?

Wastewater pump station must be designed to operate 24/7 365 for decades regardless of inclement weather conditions. A pump station designers’ nightmare is the influence that storms have on infrastructure. It becomes increasingly difficult to prevent stormwater entry on a wastewater pump station when the pump station is installed in a flood prone area. This is all compounded by the increase we’ve seen in catastrophic weather events over the last couple decades. Pump station designers have a multitude of factors we can control but the one thing we can’t is Mother Nature. To meet the EPA requirements and Ten State Code of the Great Lakes – Upper Mississippi River Board (GLUMRB) it is mandatory that a pump station be operational and accessible during a 25-year flood. 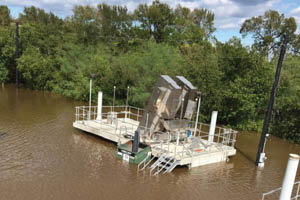 Wastewater pumping station structures and electrical and mechanical equipment shall be protected from physical damage by the 100 year flood. Wastewater pumping stations should remain fully operational and accessible during the 25 year flood. Regulations of state, provincial and federal agencies regarding flood plain obstructions shall be considered...

In order to keep your pump station accessible, operational, and maintenance ready during a flood there are many approaches pump station designers use. The four main features that a pump station needs to meet the 100-year flood level requirements are:

If any of these aren’t met, it becomes increasingly difficult to obtain EPA approval. To help this headache, Excel Fluid Group has designed a Flood Zone NoVault™ pump station that is operational and accessible during a 25-year flood and meets all these damage prevention requirements during a 100-year flood. 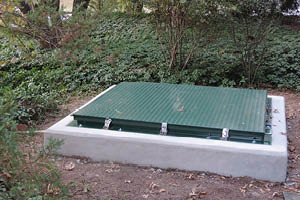 Pump station hatch doors are there to provide safety, security, and prevent debris from enter the wet well and valve vault. When designing in a flood zone, conventional designs can elevate the wet well up above the ground level to meet the 100-year flood level. Designs that don’t raise the wet well can still be in compliance with the ten-state code by using flood resistant heavy duty hatch designs. Unfortunately, in practice these hatch designs usually have latches or bolts that prevent stormwater infiltration during a flood but become a time sink and a hassle for everyday maintenance personnel. Additionally, the valve vault or wet well that aren’t physically raised above the 100-year flood levels become inaccessible during a major flood when they’re below water. This means that if there is an issue with the pump station not working during a flood, that the maintenance team is powerless to fix it.

When a pump station is flooded this can cause a whole new set of problems that span way beyond the pump station itself. With infiltration and inflow (I/I) of flood water, pumps can be forced to pump rainwater to wastewater treatment plants. The plant then can become uncompliant with the EPA because the typically untreated stormwater now needs to be treated after mixed in with wastewater. An elevated pump station is designed to prevent infiltration while performing in inclement weather.

Flood water is obviously not kind to any electrical components. During a flood scenario the GLUMRB states the electrical equipment must be protected from physical damage from 100 year flood levels and accessible during a 25 year flood. In some designs the control panel being raised prevents damage to the control panel but often leaves other components vulnerable like the electrical meter. The safest way to protect your electrical components is to elevate them to prevent water intrusion during a catastrophic weather event.

Dry electrical components aren’t the only safety element to a flood zone pump station. Preventing Arc-Flash with the controls during a flood can only magnify its importance. This should be done by separating high and low voltage to prevent any unneeded exposure to dangerous electrical shock.

Raising the wet well and electrical components can prevent them from water damage. Unfortunately, with that there is a whole new set of safety concerns with potentially dangerous heights above ground level. The EPA should require safety railings to prevent falls but as you’ll see below, sometimes fail to do so.

The following are just some examples of non-Excel Fluid Group produced pump stations we have seen traveling around the country. To get more angles of the stations check out the image gallery at the bottom of the page. 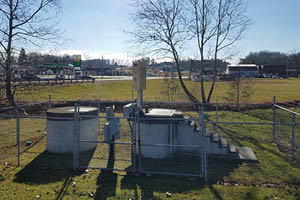 This pump station has an elevated wet well and valve vault with steps leading up to a raised wet well and control panel. Regrettably, once you’re at the top of this elevated pump station, it is surrounded by what becomes about an ankle-high barbed wire fence. This is compounded by the fact that this station does not have any safety railings on either the wet well, valve vault, or stairs. On top of all of this, the electric meter appears to be below the 100 year flood level between the wet well and valve vault. In the case of water intrusion, the meter will be prone to shorting out therefore rendering the pump station useless during a heavy storm event.

This pump station here is similarly designed with an elevated wet well but has the valves integrated into the fiberglass enclosure. Sadly, the roughly 6 ft. elevated design doesn’t have any railings, steps, or even space for the maintenance personnel to work on the platform. Furthermore, the wooden electrical riser has the control panel and disconnects separate and slightly lower than the flood zone station itself. This again leaves it vulnerable to water damage in the case of flooding.

Raised Controls on a Steel Platform 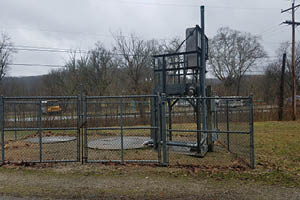 This elevated platform pump station has a steel platform with railing and a ladder for accessibility. The wet well and valve vault are in compliance with the EPA regulations. However like we mentioned before, these hatch bolts are a pain for a maintenance team to work with. From the maintenance teams we’ve spoke with they are frustrating on a clear day, let alone in the course of a catastrophic weather event. During a flood the valve vault and wet well become impossible to work on without getting a rush of flood water coming in. Beyond that, the power supply meter is placed roughly a foot off the ground and appears to be below the 100-year flood level.

Raised Controls on a Wooden Platform 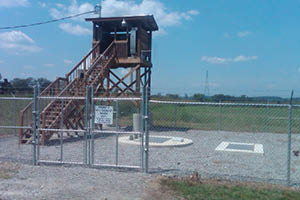 Lastly, this pump station has an elevated wooden platform that houses the control panel and has most of the electrical components above the 100 year flood level. Disappointingly, it falls in the same traps as the one above where the wet well and valve vaults are at grade. Similarly, it makes everyday maintenance and wellness checks frustrating with the heavy duty flood resistant bolts and hatch covers but also makes it once again impossible to perform work during a flood event.

As you can see, often flood zone pump stations fix some problems but create others along the way. To provide a complete solution, we’ve designed our flood zone NoVault pump station to meet all concerns. It is just like our regular NoVault design except the wet well is elevated above ground to meet the 100 year flood levels plus designed with stairs, platform, and safety railings. The NoVault has the ArcSentry™ control panel on one side of the shelter with the piping on the opposite side. The controls side has all the electronical components safely in an enclosure above the 100 year flood levels. The piping side of the shelter has the valves and a bypass port with a swing out lifting hoist. This lifting hoist removes the pumps from the wet well through the hatch door and safety grate. It then swings out through a safety gate in the railing and down to ground level. All of the crucial flood zone pump station components are housed above the 100 year flood level and provide a safe and spacious area for the maintenance team to work during a catastrophic weather event. 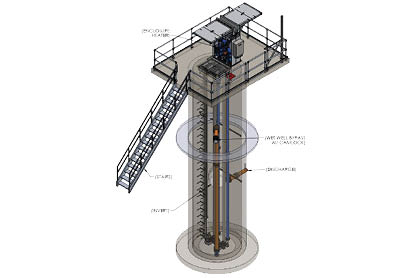 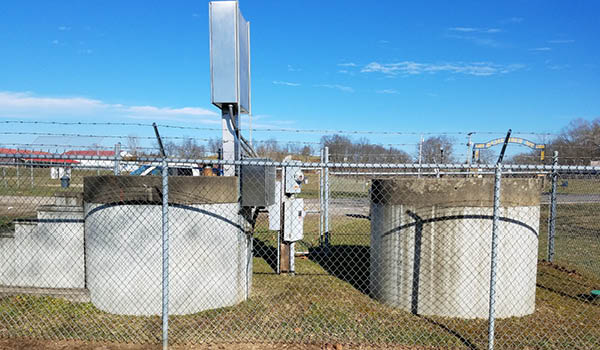 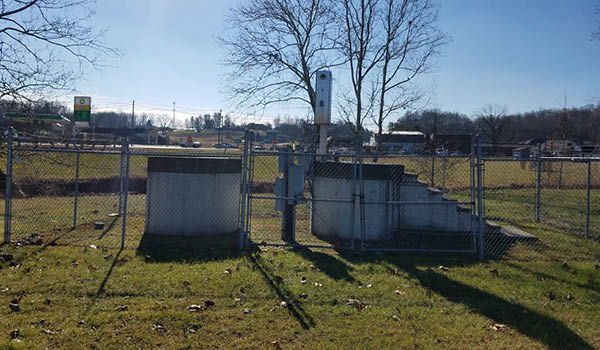 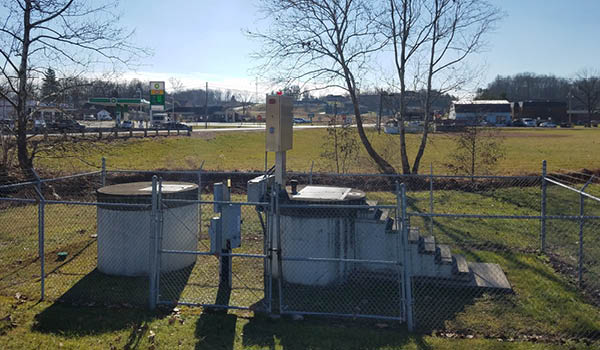 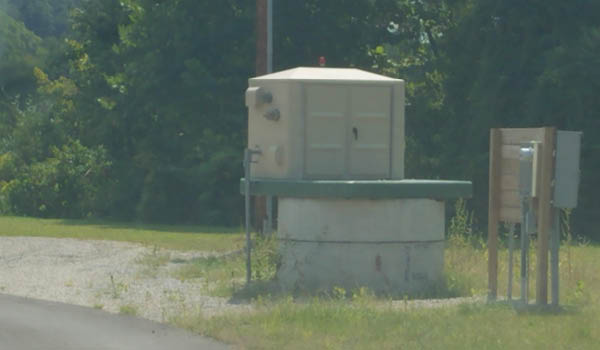 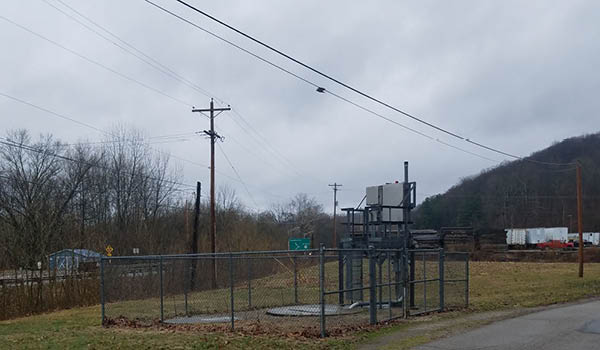 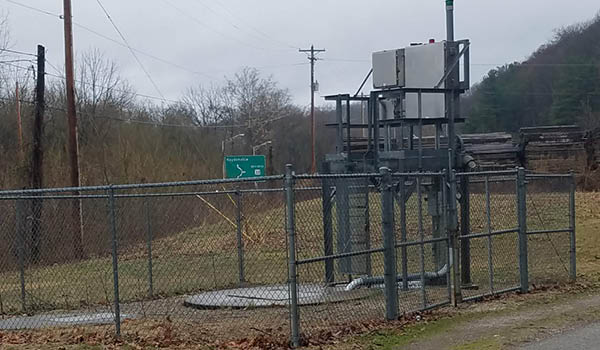 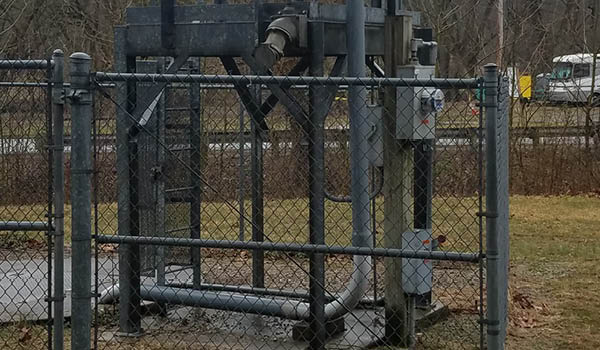 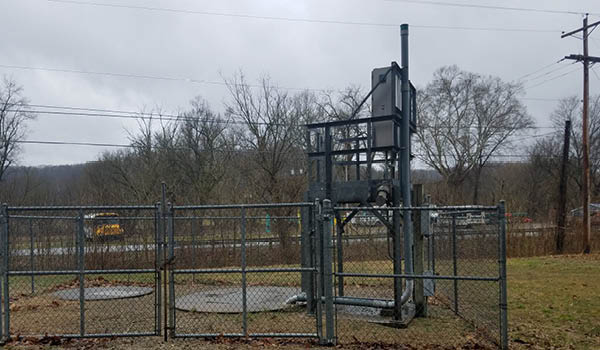 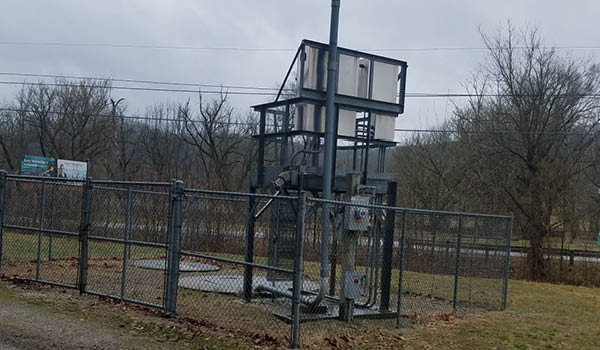 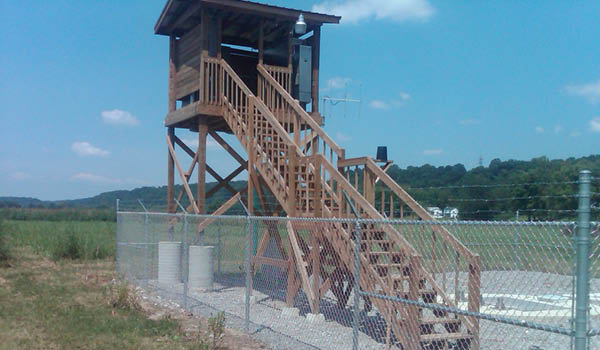 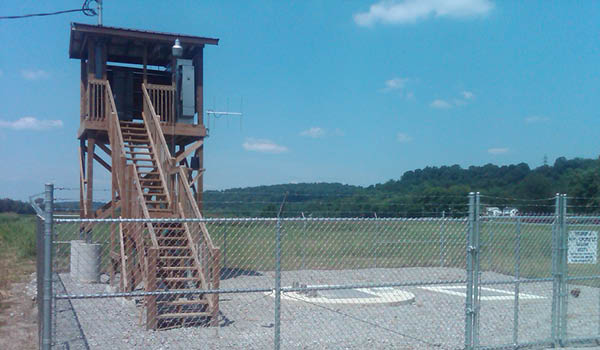 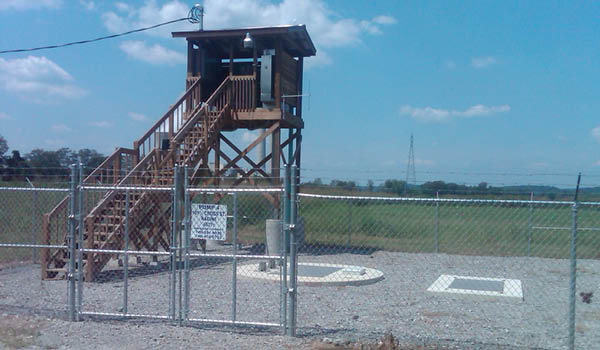 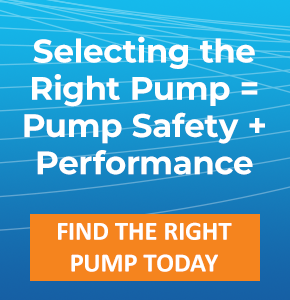 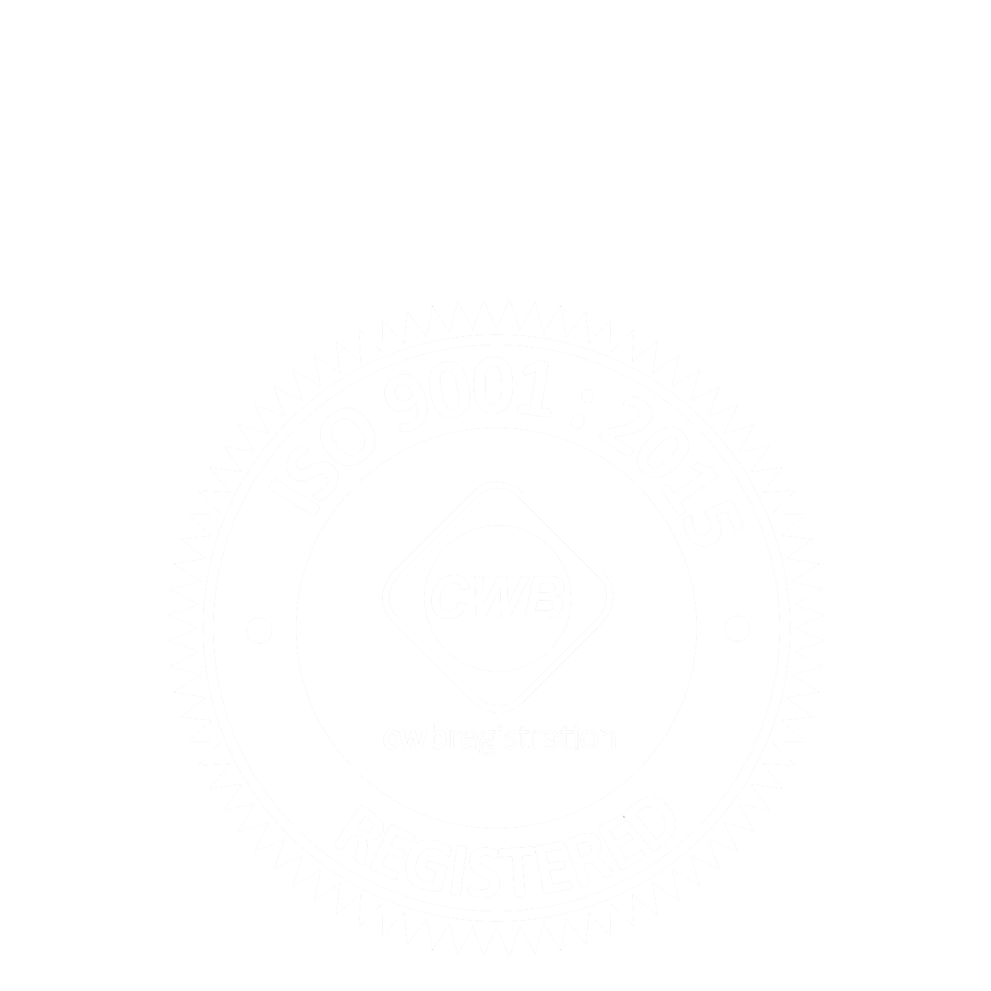